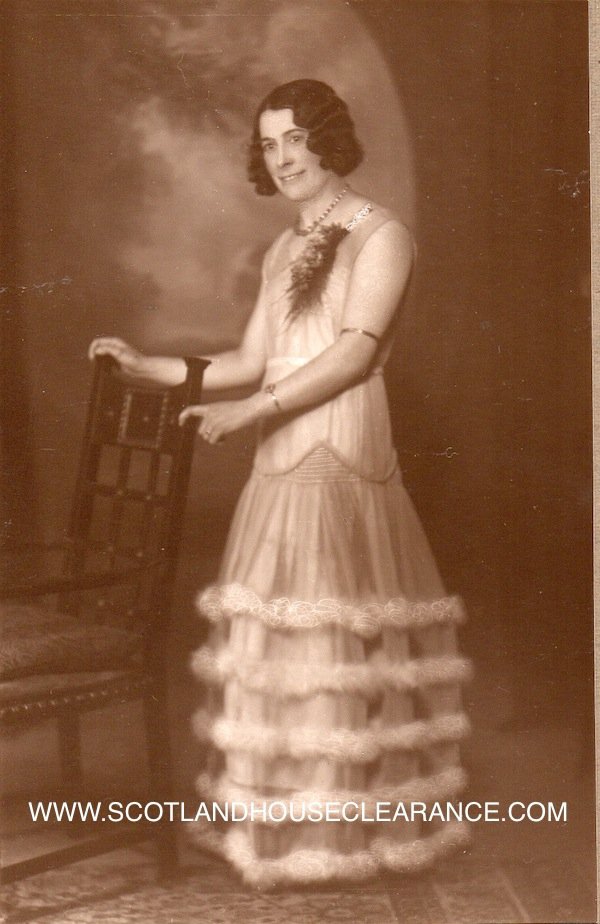 The following antique vintage photograph was acquired during a house clearance & unwanted by the families or owners of the properties cleared.

There was no law in Scotland for needing parental permission, young couples would cross the border to get married in places such as Gretna and Coldstream.

In 1929 the law on marriage changed and both the bride and groom had to be at least 16 years of age.

In the 1900’s after being wed couples would carve their initials into tree trunks or stones.

After being wed a piper would lead the entire group of guests through the villages.

When the Wedding celebrations were over, the groom would carry his newly wed over the threshold of their new home.

The father of the bride was expected to provide his daughter with a Dowry, either money or a few cattle.

In the 11th century Queen Margaret introduced the law allowing girls to ask the boy to marry her. This was only allowed on the 29th of February in a leap year.

Queen Victoria introduced the colour white for a wedding dress.

In the 16th century, wearing the wedding ring on the third finger was banned as being a Popish relic. It was later brought back in the 17th century.

In 2005 Scotland introduced the law for civil partnerships, allowing the same sex couples to legally be wed.

Putting a sixpence in a bride’s shoe is a good luck charm tradition in Angus and Aberdeenshire.

A gent’s Highland wedding outfit consisted of various items including the Bonnie Prince Charlie jacket and waistcoat and the kilt.

The original Scottish wedding dress is called an ‘Arisaid’.

In the Scottish Borders hiding a white heather in the bride’s bouquet is a good luck tradition.

The Scottish Quaich is a two handled silver bowl filled with whisky, once the wedding starts the bowl gets passed around and each person takes a sip.

In the North East of Scotland the Lang Reel is known as a traditional dance at weddings. The dance starts from the harbour and continues through to the village.

The traditional Grand March is often a first dance to take place at a Scottish wedding.

The bride will give her groom a gift called a ‘Wedding Sark’, this is a shirt that will be worn by the groom on his wedding day and he will pay for the bride’s dress in return.

I could not have asked for a better clearing service from such a professional company. Scotland house clearance were utterly fantastic, nothing was too much trouble. I cannot recommend Scotland house clearance enough to anyone in need of a clearance. There was not a single scratch on the walls after trailing heavy furniture through the END_OF_DOCUMENT_TOKEN_TO_BE_REPLACED