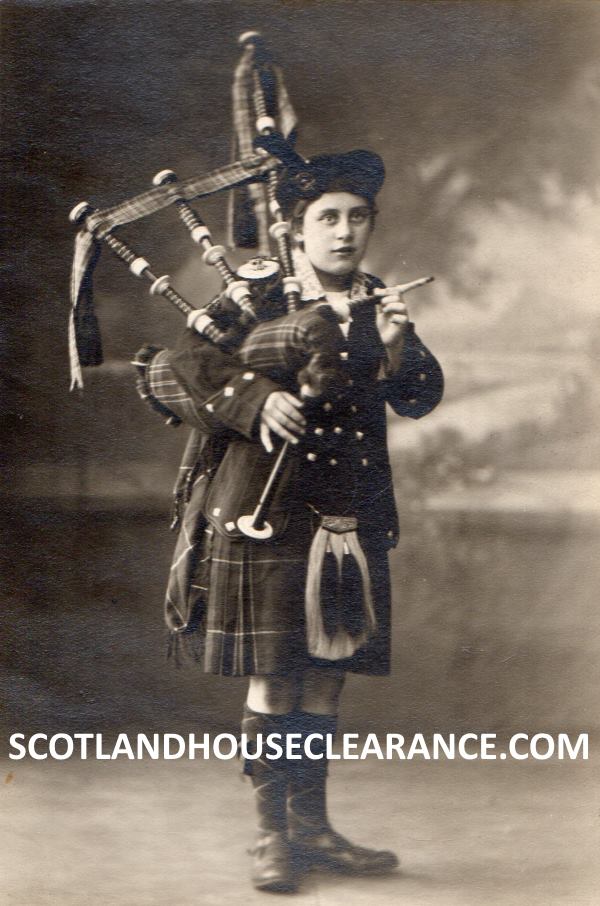 This photograph was acquired during a house clearance in Glasgow, it was unwanted by the family.

The kilt was invented in the 1720’s by Thomas Rawlinson.

The kilt originated in the highlands as an un tailored, 5 metre-long piece of cloth that was belted at the waist.

The Scottish kilts are known as the national dress of Scotland.

In August 1747 the British government banned the kilt from being worn, the ban was lifted in 1783. The only people allowed to wear the kilt during this ban were the pipers in the military.

The Kilt often comes in the colour green or red.

Traditionally a Kilt is made from 100% pure wool, usually in tartan.

A Kilt is a product of the Gaelic heritage that the modern-day Scots are very proud of.

The pleating the Kilt was created in the mid 18th century.

In cold winds and bad weather a highlander would dip his kilt in water and lie down in it, this would make the wool swell to give better protection against the wind.

Kilts are pleated at the back.

The Kilt in its original form is a very basic garment that requires no tailoring.

The number of colours in a tartan highlights the rank or overall importance of the person wearing it.

There are around 4500 different types of tartan today.

The oldest piece of tartan was found buried in the ground, stuffed in a pottery jar in Scotland near Falkirk.

The earliest tartans ever found are over 3000 years old.

Tartan cloth was originally hand woven and was supplied locally.

The bagpipe is a wind instrument with a number of pipes and a bag.

Although bagpipes are mainly associated to Scotland, the oldest references to bagpipes appear in Alexandria, Egypt, in 100 BC.

There are many materials used when making a bagpipe but the most common are the skins of local animals such as goats and sheep.

Bagpipes found their footing in Scotland in the 1700’s, this is when the different types began to appear.

Scottish bagpipers are known as the Highland bagpipes.

Bagpipes were banned in Scotland in 1560 and again in 1646. James Reid, a musician was executed for having a bagpipe during this time.

During WW1 500 pipers were executed for playing the bagpipes.

The Battle Of Culloden Facts