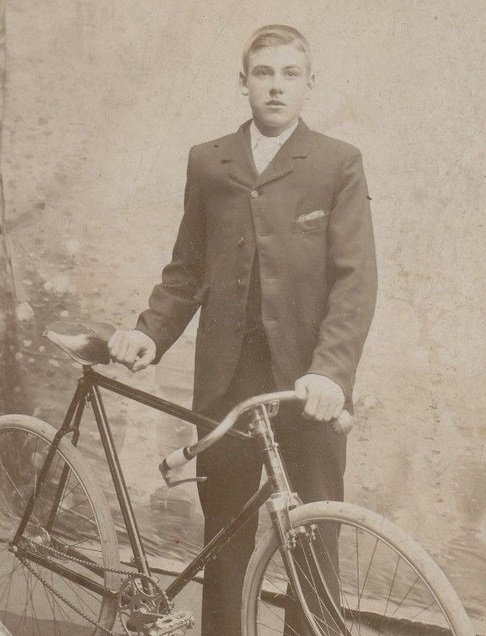 The following antique vintage photograph was acquired during a house clearance & unwanted by the families or owners of the properties cleared.

There are over one billion bicycles found throughout the world.

Although Leonardo da Vinci drew some rough sketches of a contraption that looked like a bicycle, the Frenchman De Sivrac built the first bicycle-type vehicle in 1690.

There are more bicycles than cars in the world.

The “modern” bicycle was fitted with pedal cranks and iron rims in 1840 by a Scottish blacksmith named Kirkpatrick Macmillan.

Cycling only three hours per week cuts your risk of heart disease and stroke by 50%!

The term “bicycle” first entered into popular usage in France in the 1860s.

About 100 million bicycles are made worldwide every year.

You can park about 15 bicycles in the same space that one car takes.

The prototype of the mountain bike was not developed until 1977.

The smallest adult bicycle ever created had wheels made from silver dollars.

The fastest speed ever recorded on a bicycle was attained by American Olympic Cyclist and Ironman triathlon competitor John Howard, when he reached 152.2 mph in 1985.

Penny-farthings were only popular for a few years, from the 1870s to the 1890s, but their strange design has since become an icon of the Victorian era.

The most expensive bike ever, a Trek Madone designed by artist Damien Hurst, was auctioned for $500,000 at Sotherby’s.

20 million bikes are owned in the UK, which means that 1 in 3 adults has one – although only 6 million people are regular cycle users.

Prior to the French giving the bicycle its name these machines were often referred to as velocipedes.

Wearing a bicycle helmet is very important. Statistics show that they are 85% in preventing a head injury when a cyclist is involved in an accident.